A record $207 billion is projected to be spent by online shoppers this holiday season, our second with COVID-19 keeping many people away from stores. More online shopping correlates to more packages being delivered.

Last year, a record 20 billion parcels were shipped to U.S. addresses. Multiple studies found there was an increase in porch pirates swiping delivered packages from porches, doorsteps, and mailrooms in apartment buildings.

A C+R Research survey found that the percentage of Americans who have personally had a delivered item stolen rose by nearly 20 percent between 2019 and 2020, and more than 60 percent of Americans know someone who has had a package swiped.

With ecommerce expected to peak this November and December, chances are good that package theft will keep rising as well.

Another factor likely to make matters worse in the final months of 2021 are issues with the global supply chain. Supply chain disruptions, manufacturing delays, and delivery hiccups are all expected to add to the time it will take for online purchases to end up on shoppers’ doorsteps. Consumers may think their product is stuck at a port, when in fact, it may have already been delivered and stolen.

We wanted to understand the scope of this problem, including which states’ residents are at the highest risk of falling victim to porch pirates, and share tips for keeping deliveries safe.

Here are a few of our key findings:

What Is Porch Piracy?

While most of us have heard of porch piracy, it is not a legal term. In fact, in many states there are no separate laws or ordinances regarding the theft of shipped parcels left on a porch. It is currently legally classified as larceny-theft.

The FBI and other law enforcement agencies classify larceny-theft as a property crime, or the taking of someone else’s property without permission. It differs from burglary, which requires a criminal to unlawfully enter a building or structure. But snatching a newly delivered package from a porch, stoop or patio need not involve entering a structure at all, which is why porch piracy lives in a bit of a gray area (more on what States are doing about it later).

In fact, the rate of larceny-theft is higher than the rate of all other crime categories combined, including ones like auto theft and violent crimes that gain far more media attention. 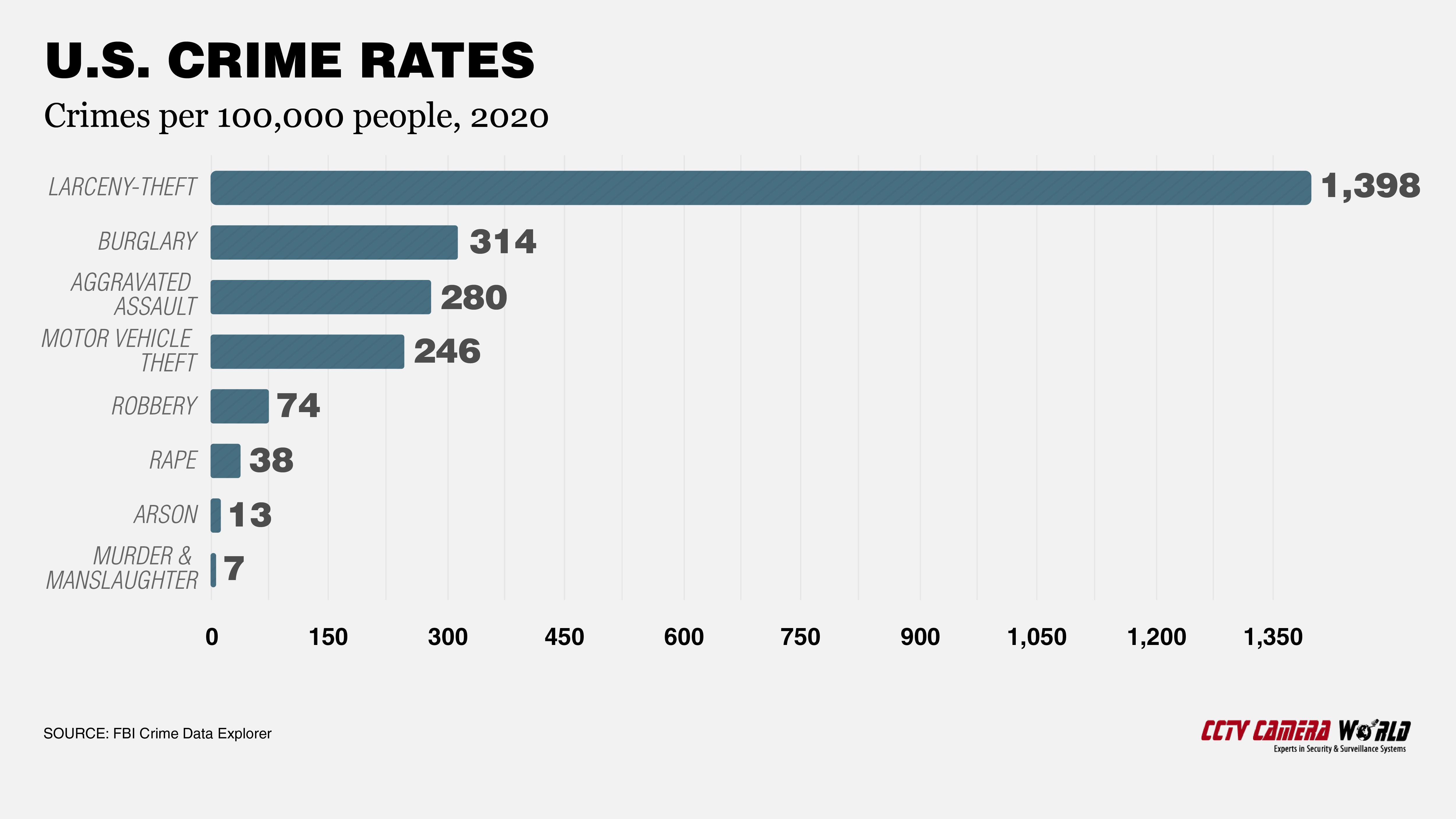 This type of theft tends to be costly, particularly given how often it occurs. In fact, almost half of all larceny-theft incidents involve items or cash valuing more than $200. 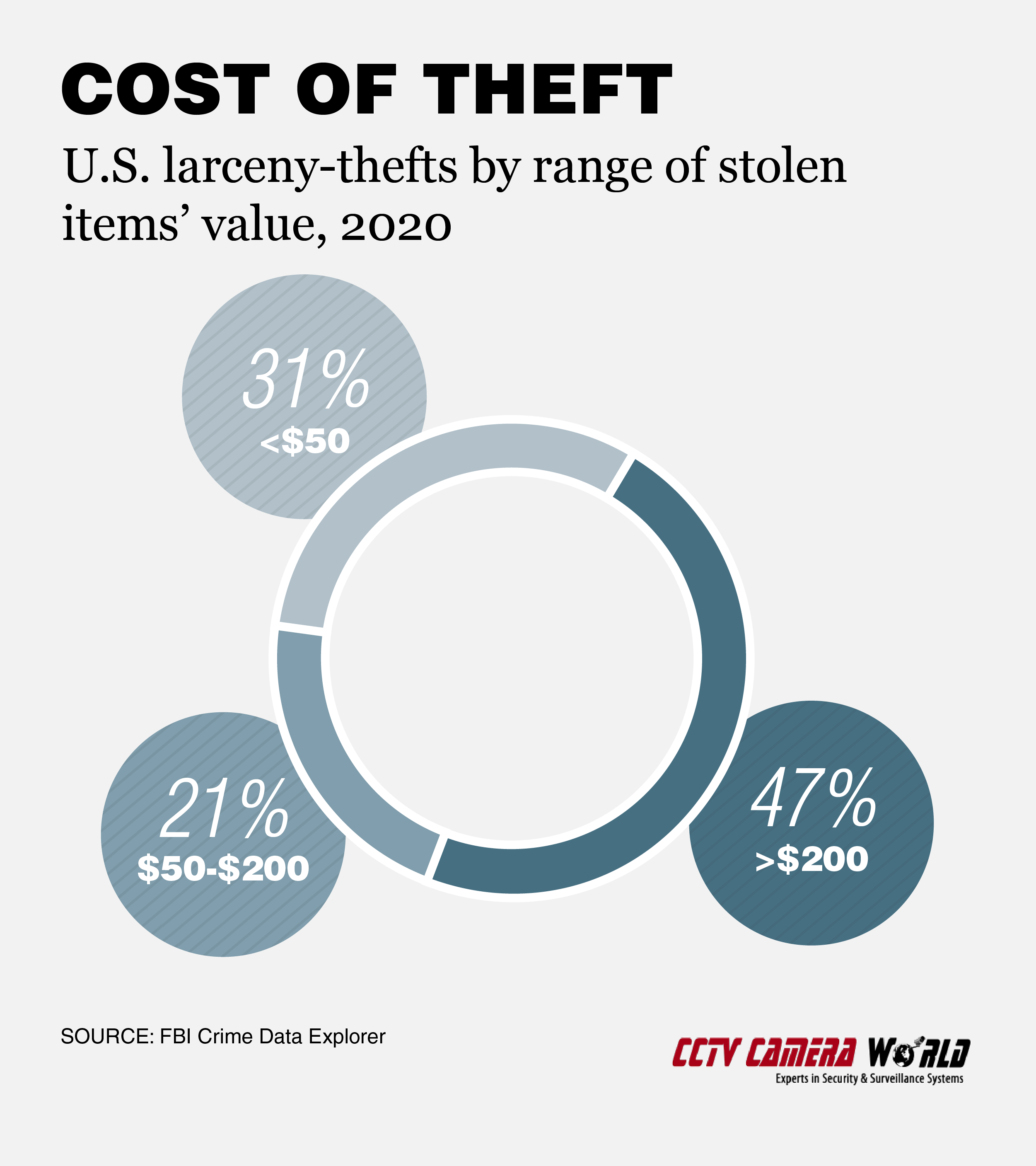 States Most and Least at Risk for Package Theft

Larceny-theft is the most common crime in the U.S., and the same is true in every state.

Because porch piracy or package theft does not yet have its own crime category on the federal level, it falls under the larceny-theft banner. The best way to understand which states are the most and least at-risk for package theft is to see how common larceny-crime is in every state.

Some states are taking porch piracy more seriously than others. Currently, 14 states have passed or are considering laws that would establish added penalties for package thieves and/or are creating a new crime category specifically covering these incidents.

Notably, 10 of those 14 states have above-average rates of larceny-theft, including South Carolina, which ranks third overall. Lawmakers there are considering a bill that would make package theft a felony and establish minimum jail time.

In Texas, porch piracy is a felony that includes a maximum 10-year prison sentence for people convicted of nabbing deliveries from more than 30 addresses, while in California, Michigan, and Oklahoma, porch piracy is a misdemeanor even for first-time offenders. 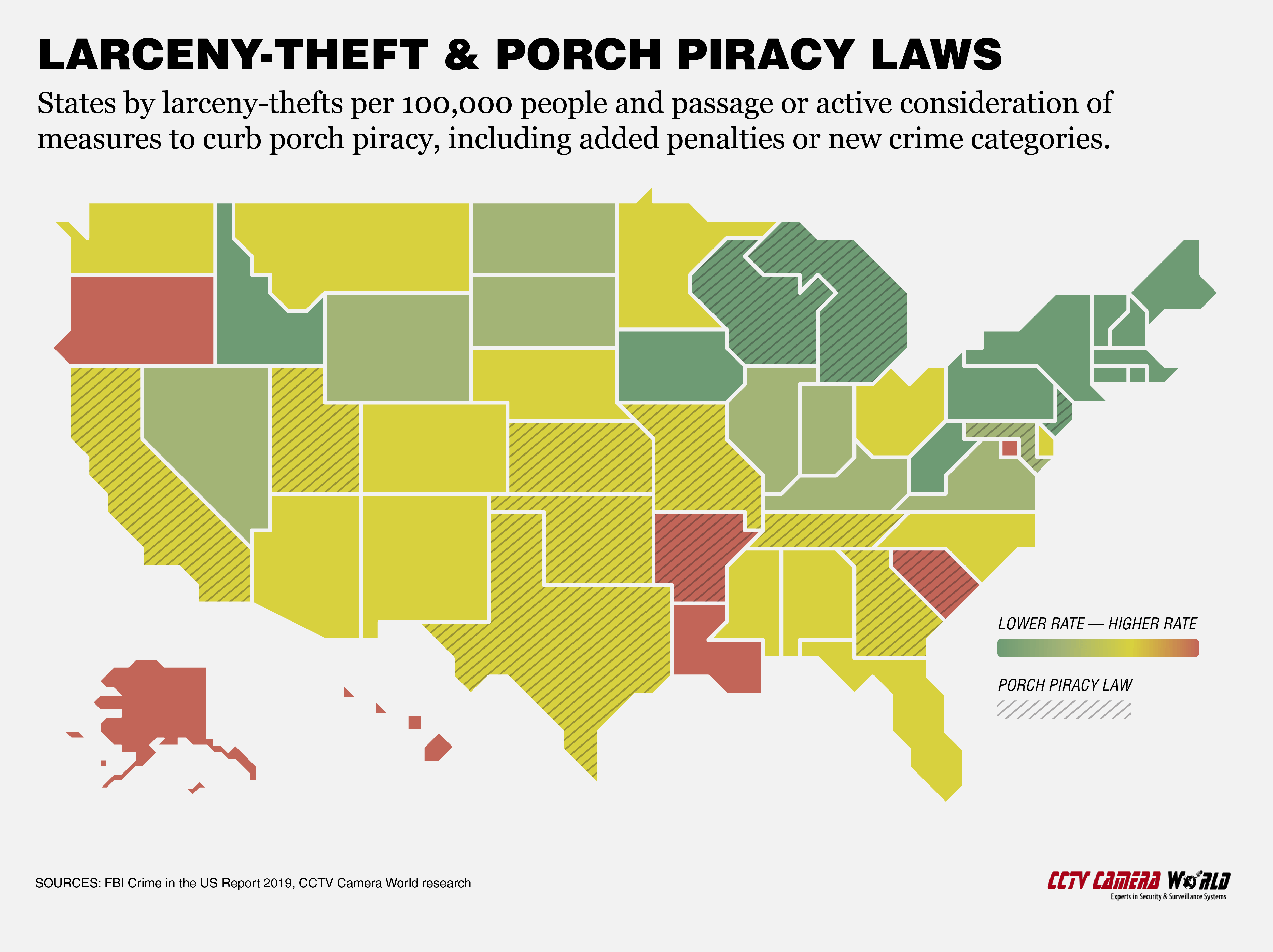 The District of Columbia has the nation’s highest larceny-theft rate, according to the FBI, which is not surprising given its high population density. Louisiana and South Carolina are second and third respectively, and three of the 10 states with the highest larceny-theft rates have also passed or are considering porch piracy laws (South Carolina, Arkansas, and Tennessee).

The rise of online shopping, coupled with entering our second holiday season during the pandemic, it is likely that package theft will be on the rise.  This type of crime is continuing to grow, and it is leading to harsher legal penalties in some states.  Until there is a better government action plan, individuals can take steps mentioned above to mitigate risk.  If we are all a little more vigilant, we can avoid porch pirates and make it a great holiday season to remember.