The last few years in America have been difficult to say the least. So much so that the FBI’s most recent crime data shows that violent crimes in the U.S. increased by 5.6% in 2020. The murder rate grew by 30% marking the largest single-year increase on record.

This is certainly alarming when you consider that crime has been declining over the last 30 years. Though it is not entirely surprising given the anger and stress that has engulfed the country in recent years which has been seen anecdotally and now empirically.

This includes the economic, medical, and mental trauma associated with the evolving COVID-19 pandemic. As well as the political, social, and racial tensions which have reached a boiling point in recent years evidenced by the anniversary of violence at the U.S. Capitol on January 6.

On a positive note, the property crime rate decreased in 2020 with many people at home during the pandemic, though this is a continuation of a downward trajectory for property crimes.

As we kick off 2022, we wanted to pay tribute to the cities, helpful citizens and men and women in uniform that work to keep our cities safe.  To do so we examined the most recent FBI data on crime rates to find out which are the 100 safest cities in America.

The rankings were based on the total crime rate in 7,000 cities across the country. The total crime rate is all crimes such as violent crimes (murder, rape, assault, etc.) as well as property crimes (burglary, larceny-theft, motor vehicle theft, and arson). 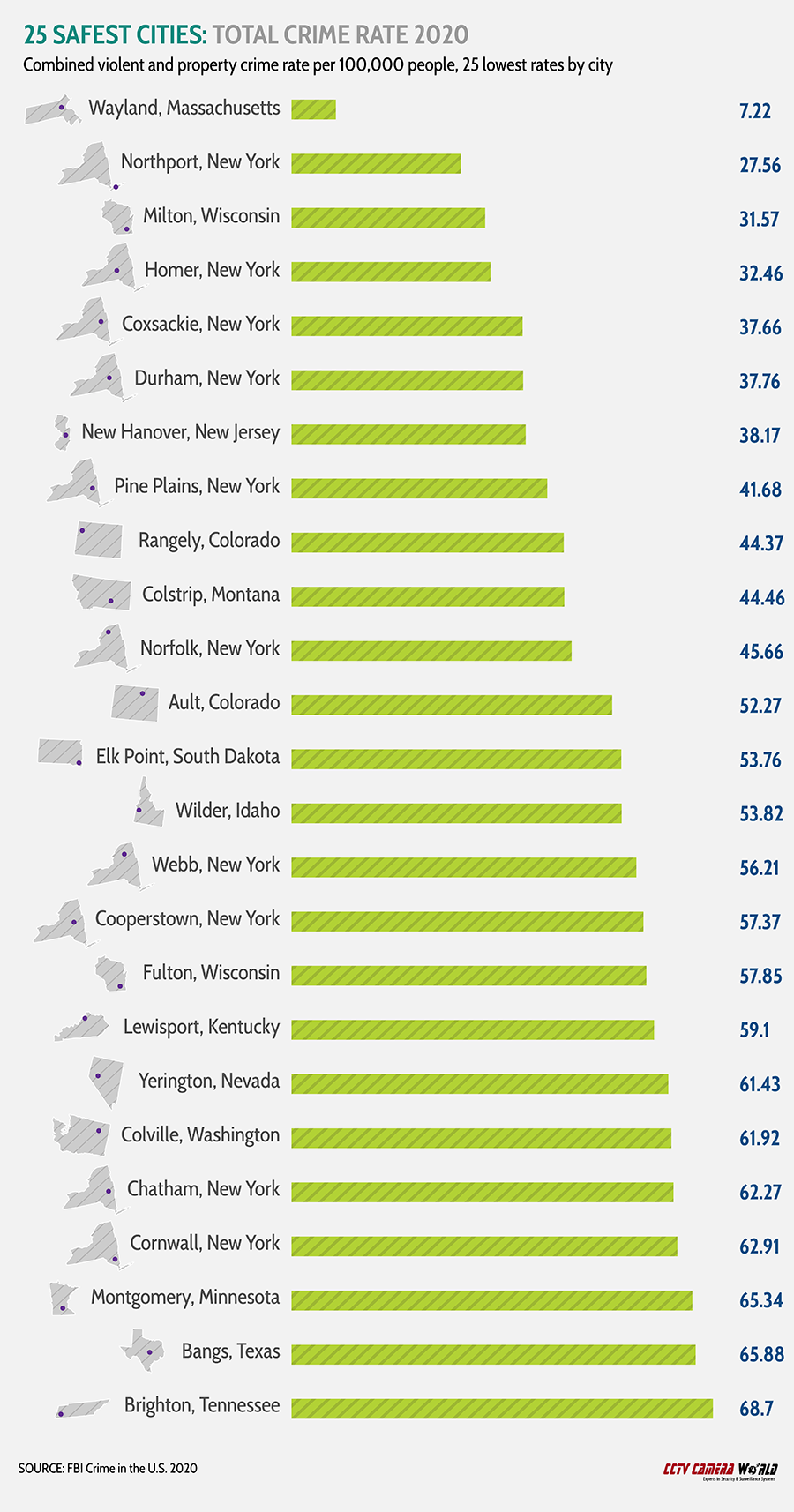 Among the cities with the 25 lowest rate, a combined 40 total crimes were reported in 2020; these communities combine to account for about 92,000 residents. Ten New York cities and towns are on the list, while Colorado and Wisconsin have two each. Fourteen states are represented on the top 25 list.

As we’ve seen, smaller communities tend to have smaller crime rates, while for larger ones, the reverse is usually true. However, there are a handful of major U.S. cities, those that are home to at least a half-million people, where the combined crime rate in 2020 was lower than for the U.S. overall. 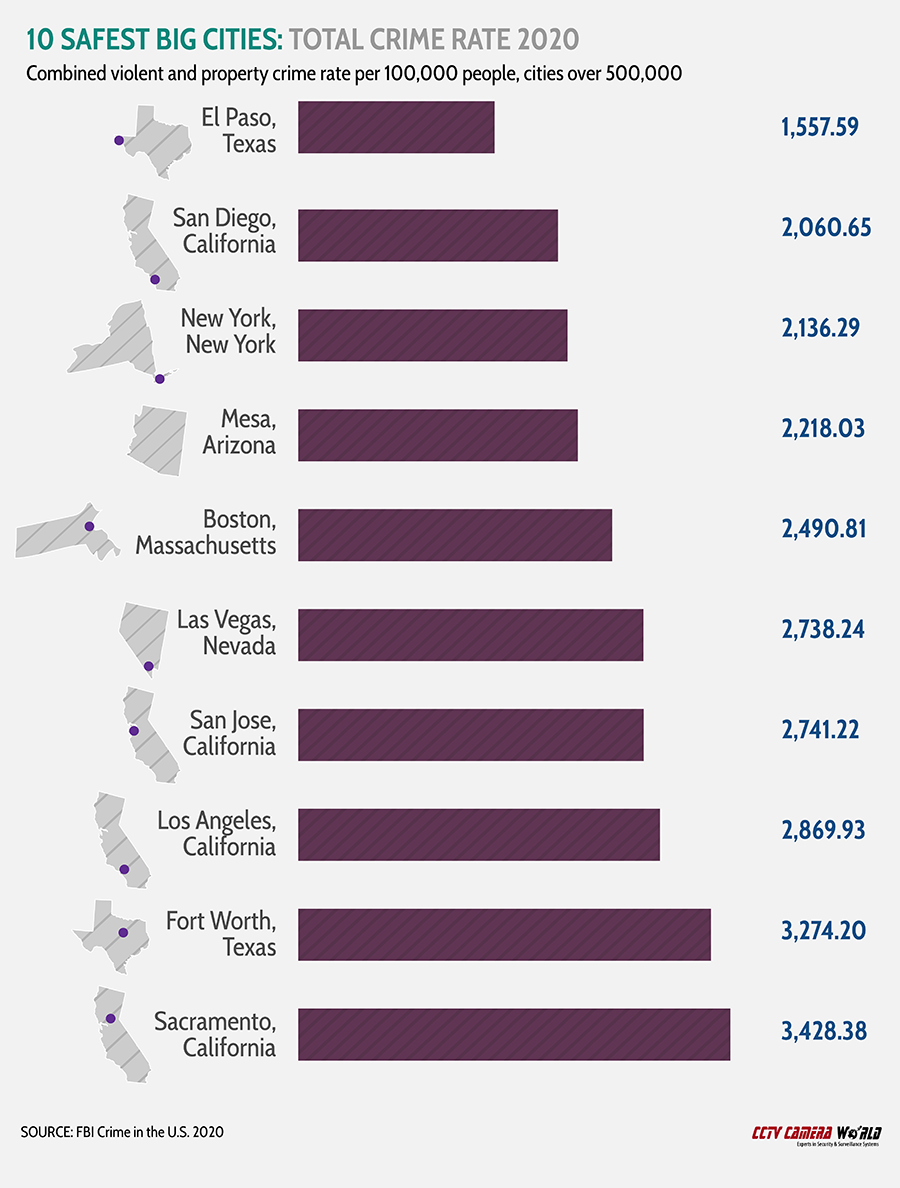 Looking at cities with populations between 150,000 and 500,000 shows that Port St. Lucie, Florida has the lowest overall crime rate, followed by Cary, North Carolina, and Santa Clarita, California. 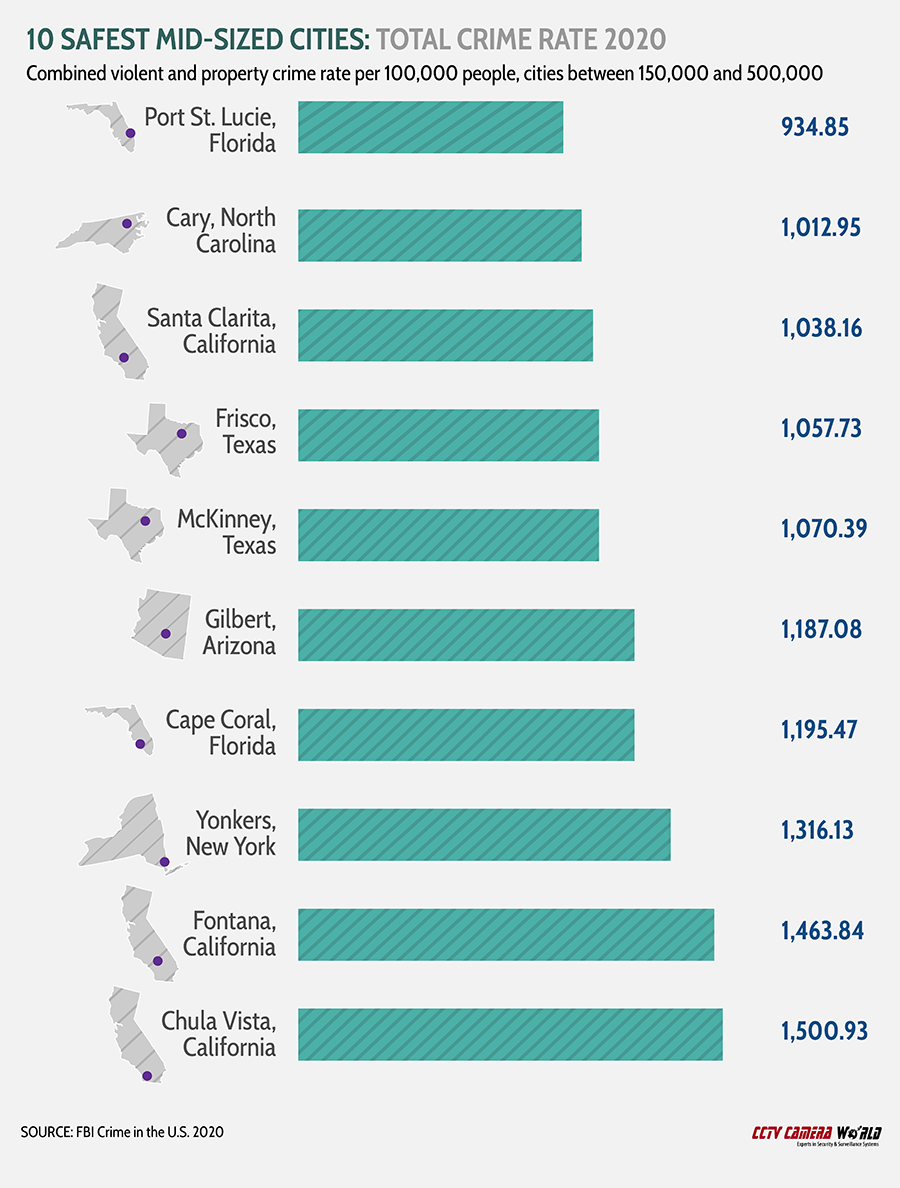 All 10 of the mid-sized cities with the lowest crime rates in 2020 have seen those rates fall since 2011. In fact, only 17 of the 121 cities in the group have seen their overall crime rate rise over the past decade.

In the 1,278 cities with population between 50,000 and 149,999, Franklin Massachusetts has the lowest overall crime rate, just 110.9 per 100,000 residents. Nine of the 10 cities with the lowest crime rates in this population bracket are in just four states — Connecticut, Massachusetts, New Jersey, and New York. The other is in Indiana (Zionsville). 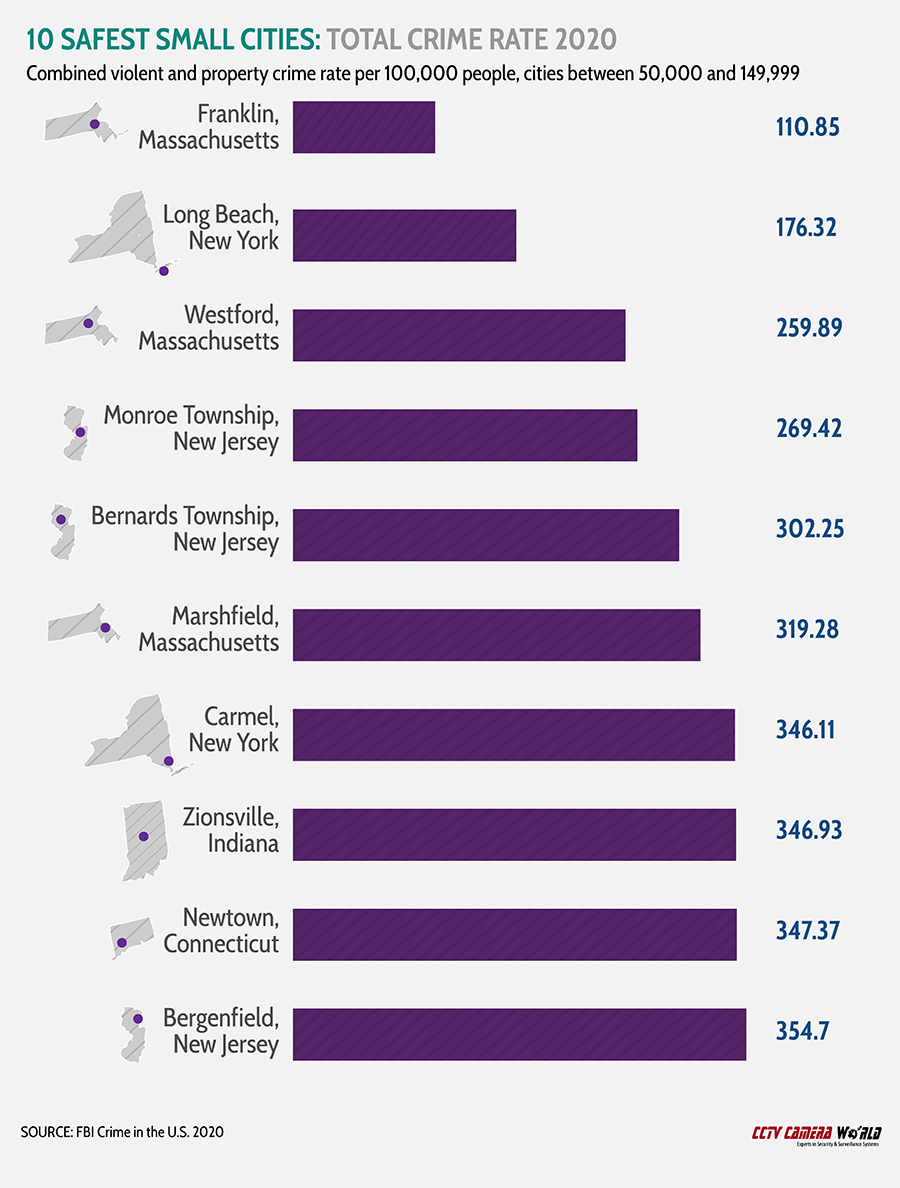 In keeping with the trend we’ve noted toward lower crime rates, nine of these 10 cities have seen their overall crime rates fall over the past decade (2011 data was unavailable for Marshfield, Massachusetts). Long Beach, New York had the biggest decline among these cities, with the overall crime rate falling by 81 percent.

Safest City in Every State

In most states, the city with the lowest crime rate has a lower overall crime rate than the nation as a whole, which had a combined crime rate of 2,356.7 per 100,000 people. The two exceptions to this are Washington, D.C., which given its population density is better compared to a city than other states, and Illinois, for which the FBI excluded important bits of data.

The agency’s reporting for 2020 for Illinois excluded data on arson and larceny-theft. Because larceny-theft, which includes things like shoplifting, is by far the most common crime in the U.S., we included only one city in Illinois for this reason. So, by default, Rockford is both the safest and most dangerous Illinois city in our findings.

Those issues aside, there is a great deal of variation in crime rates when looking at the safest cities in every state. Even in neighboring states, the differences can be dramatic. In California, for example, the city with the lowest crime rate is Rolling Hills, with a rate of 325.6 per 100,000 people; Oregon’s safest city is Vernonia, where the crime rate is nearly three times higher — 871.8 per 100,000.

For most people, it’s not realistic to simply pack up and move to one of these hyper-safe communities. And even in a community where the crime rate is lower than average, violent tragedies still take place, and property crimes still occur.

So, regardless of the crime rate in the city where you live, there are some common-sense ways you can make your home and property a less likely target for crime. Here are our tips for ensuring your home is as safe as possible no matter where you live:

Safety is a relative concept.  After all, as we’ve seen, even in the safest cities in America crime still does occur. However, given the recent rise in violent crimes and the likelihood that anger in America will continue into 2022 from the reasons outlined earlier, it is important citizens take a proactive, common sense approach to protecting their homes and families.

The data for this report came from the FBI, which collects and publishes crime data for cities and towns across the U.S. on an annual basis. Data for the most recent year 2020 is available here, and data for 2011 here. The rankings in this study are based on the total crime rate in more than 7,000 cities. The total crime rate is the average of all violent crimes (murder, rape, assault, etc.)  and all property crimes (burglary, larceny-theft, motor vehicle theft, and arson).  Cities with very small populations that reported zero crimes were omitted from the list.

Most Illinois cities did not have arson or larceny-theft data, and since larceny-theft is by far the most common single type of crime, we excluded all but one Illinois city — Rockford, which did report this data. There were a handful of other cities we excluded for this reason, but Illinois was the state most widely affected by data reporting limitations.