Night Vision Technology and Its Applications 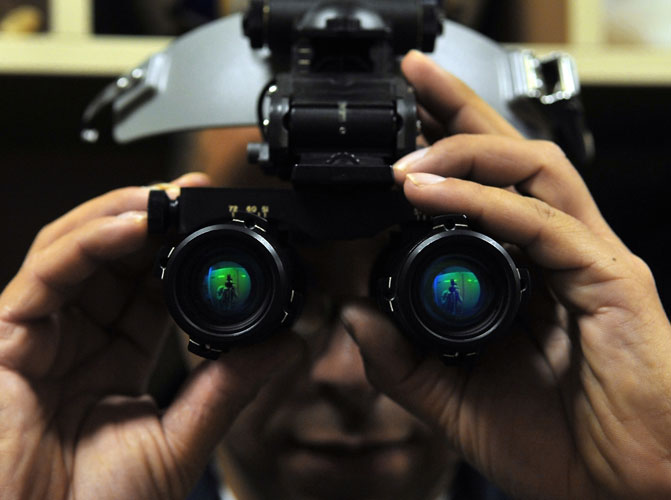 “Night vision” is a pretty straightforward term – it is simply the ability to see in the dark, or in low-light conditions. We take it for granted in this day in age where almost every security camera has night vision. Generally, at least compared with many other animals, humans have poor biological night vision, which has made our desire to see in the dark difficult to fulfill. Difficult, but not impossible – at this point, we have several different types of night vision technologies that are used for various purposes.

Technology has granted us two ways to see in the dark: either by image enhancement, or by thermal imaging. Image enhancement is what comes to mind first for most people when they think “night vision,” and it’s the technique used by night vision goggles. The broad class of devices that use this technique is called NVDs, or night-vision devices. In brief, image enhancement involves using a component called an image-intensifier tube to collect very small amount of light from a wider spectrum than the human eye can perceive, and then amplify it until the naked eye behind the goggles can see.

To explain in more detail: NVDs use a traditional camera lens to capture light. This light then travels to the image-intensifier tube, which is typically powered by a set of AA batteries. The image-intensifier tube then converts the light energy into electrons. Until this point, the light is multi-colored, but there is no way to preserve that when the image gets converted into electrons. So, at this point, the image is essentially black and white. As these electrons travel through the tube, the tube releases more electrons to multiply their numbers by thousands. A few atoms enter one side of the NVD, and a few thousand atoms exit the other side, where they hit a phosphor-coated screen, which turns the image green. This is done intentionally, for two reasons: human eyes are more sensitive to green light, and it causes less ocular fatigue than white light. Finally, this phosphor screen is viewed by the user through one more lens, called the ocular lens.

Thermal imaging devices work by capturing high-frequency infrared light (IR) rather than visible light. IR in this frequency range (3-30 microns) is known as thermal-IR, and it differs from other frequencies in that instead of being reflected off of an object, thermal-IR is emitted by that object, due to the movement of that object’s atoms. Thermal imaging devices capture the thermal-IR light, and then scan that light with an array of IR detector elements. These interpret the IR light as a sort of heat-map, and then convert it into electrical impulses. These impulses go through the device’s processing unit, which converts the data into an image and sends it to the display.

Like many new technologies, night vision devices were invented to aid us in waging wars. Just before WWII, Germany developed the first simple IR devices, and the Allies developed their own in response. At this point, these devices could amplify light by around 1000x, but were so heavy that they had to be mounted on trucks. This made them easy targets, and there were many situations in which they were unusable.

During the 40s and 50s, the US Army worked in conjunction with the RCA (Radio Corporation of America) to continue to improve on night vision technology. In the mid-60s, we had our first passive NVDs, which functioned on their own without the need for an infrared illuminator. Thermal imaging made some huge advances in the 1970s, and continues to improve. In the early 1990s, NVDs were used extensively by US forces during Operation Desert Storm, providing the US with another huge advantage. Current NVDs can amplify light by more than 50,000x, and they continue to grow more powerful as science continually makes improvements.

Night vision was originally developed for warfare. Information becomes even more valuable when lives literally depend on it, and the locations of enemy troops and awareness of your own surroundings are two of the most important types of information. The ability to gather this information at night, when your enemies may be blind, is a huge advantage. The military uses a variety of NVDs for these purposes – hand-held sighting scopes, weapon scopes, and night vision goggles being the main three.

Military use isn’t the only application for night vision, though. Night vision cameras are often used for security, as well. They are especially useful in less-populated areas where there is less light. Law enforcement and the military also both use NVDs in helicopters for surveillance when necessary.

Thermal imaging devices can be used for many of these applications as well, and more. NVDs provide an amplified view of what you would normally see, although it’s only in one color. Thermal imaging devices, on the other hand, pick up heat, which makes them useful in other ways. Since thermal-IR energy is emitted rather than reflected, these devices can work in the complete absence of any light. This makes them particularly useful for firefighters, who may find themselves going into a building that is not only dimly lit, but also choked with smoke. Firefighters wear a helmet-mounted thermal imaging device that drops down over one eye, sort of like a monocle, allowing them to see in the unfriendly conditions they are often faced with.

Like night vision, thermal imaging is useful for security, as it is able to pick up human heat signatures in situations where it might be hard to see what’s going on even with an NVD. Thermal imaging is also extremely useful for law enforcement and the military, as heat signatures can be a dead giveaway of someone’s location, whether that “someone” is a suspect or an enemy combatant.