We’re back again to take a look at some more cameras from Hikvision and Dahua.  This time we’re going to step it up to some varifocal, or adjustable lens, IP bullet cameras.  Like last time, we’re going to be comparing a model of IP camera from each manufacturer that are as close to each other as we can get.  Sit back, get comfortable, and get ready to take a look at the Hikvision DS-2CD2632F-I (2632) and the Dahua IPC-HFW5300C (5300C).

What’s in the box?

As it was with our smaller fixed lens bullet IP cameras, the contents of each cameras boxes are very similar.  Both include a user manual, mini disc, drilling template, and mounting hardware.  Again, the mini discs contain a general user guide, software, and configuration tools.  After that, the Hikvision 2632 separates itself a bit.  Unlike the Dahua 5300C, the 2632 comes with a BNC test cable that you can attach to its Infrared (IR) board and then use with a standard CCTV tester.  Understandably not everyone has a CCTV tester so this may not be a big to you.  If you do, you might find that this can make your installation a bit easier.  While the 5300C doesn't have this add-on, you can still set the camera up in a similar fashion through the use of mobile applications and your Smartphones and/or tablets.  The 2632 also includes a junction box suited for this camera.  This junction box will allow you to store the cameras pigtail inside of it instead of having to be pulled through the mounting surface or run through the air.  This can potentially mean drilling a much smaller hole as long as you don’t mind that your camera sticks out an extra inch and half or so.  Junction boxes such as this are available for almost every camera you can put your hands on but they usually run you another $10-$20, so it’s a nice little add-on from Hikvision.  You should note that this is not the same as a junction box you get from the hardware store as this one is absolutely not weatherproof.  This means that you'll still need to find a way to protect those connectors or seal the box; otherwise those contacts will corrode and you'll either need to re-tip the cable or even potentially replace the camera.

How do the cameras feel?

In this particular case, the Dahua 5300C actually makes the Hikvision 2632 feel cheap.  It’s clear that both are solidly constructed, but the 5300C feels like a freight train in your hand while the 2632 just simply feels like a camera.  This also means that the 5300C is definitely heavier.  The 5300C comes in at approximately 3.8 pounds while the 2632 is only 2.6 pounds.  This makes the 5300C about 30% heavier than the 2632.  At the end of the day, both are rated IP66 and hold out to the same conditions.  Occasionally an argument is made that the Dahua 5300C is more resistant to vandalism than the Hikvision 2632 because of it’s more solid design, but it really makes no difference.  The front of each camera is still glass and can still be vandalized or destroyed the same way.

What do you see?

From a features standpoint, there’s not a lot to cover on the outside of the cameras.  Something we didn't mention that comes in the box with the Dahua 5300C are three threaded detents.  These are meant to be screwed into three separate points on the bracket of the 5300C which will almost permanently lock that arm into place; of course it’s only permanent if you leave them in.  This should alleviate anyone's concern about the weight of the camera being too much for the bracket to handle.  We should also mention that even without the use of these detents, we saw no movement in the bracket under the cameras weight.  Before we get into dimensions, there are a couple more differences.  The reset button for the Hikvision 2632 can be found behind the IR board, while the reset button for the Dahua 5300C in located on the cameras pigtail.  Since there’s more than one way to install an IP camera, advantages and disadvantages can be found with either of these locations.  The length of each cameras pigtail is also noticeably different.  The pigtail on the Dahua 5300C is 400mm in length while the Hikvision’s pigtail is only about 130mm long.  The 400mm pigtail on the 5300C is a bit longer than it probably needs to be but not enough to get in the way.  The 130mm pigtail on the 2632 is dangerously close to bordering non-functional.  To add to that, while the entire pigtail is 130mm long, the portion with the network connector is actually 30mm shorter.  If we discount the connector at the end, that leaves you with about 65mm to get that sucker through your mounting surface.  That is almost guaranteed to not be sufficient if you’re going through an exterior wall.  Knowing full well this might be the case, this may be why Hikvision has opted to include that junction box for free with the purchase of this camera… 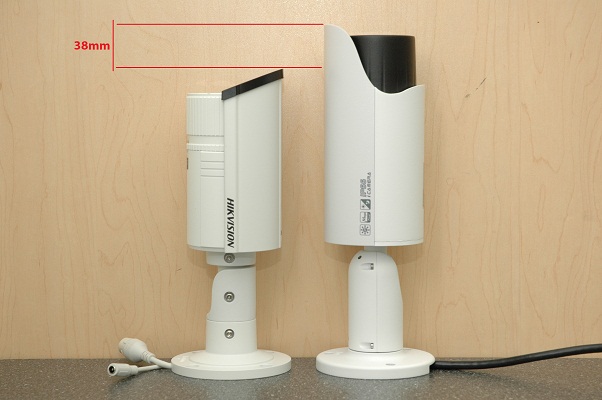 Besides their lengths, you'll want to know that the base of the 2632 measures 105mm in diameter and the 5300C comes in at 104mm.  Neither IP cameras sun shield is meant to be adjustable so there's nothing to really cover there.  By viewing the image below, you'll probably end up with anything else you may be curious about. 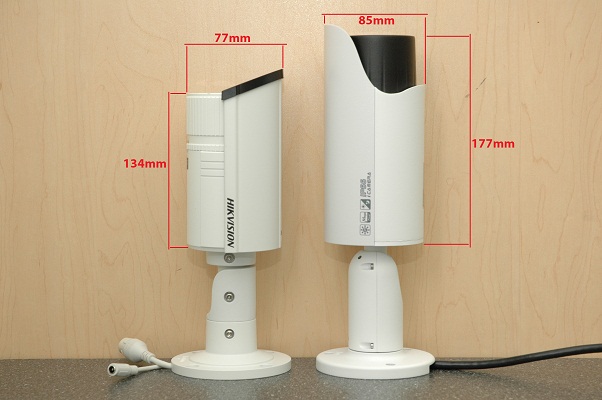 There's just one more thing we want to cover here.  Since we mentioned you'll likely find yourself needing to use that junction box that comes with the Hikvision 2632, we thought you'd like to see what happens to the overall length with that component attached.  This pretty much kills any advantage the Hikvision camera had in this category.  With the junction box attached, the 2632 now only stands 2mm shorter than the Dahua 5300C; that's about the width of a fingernail. 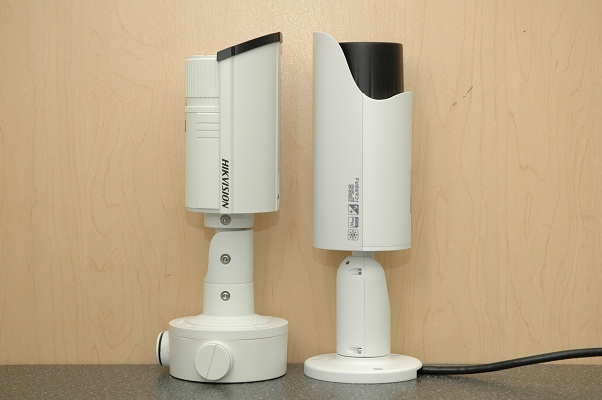 We're not going to dive into every single thing on this list as we previously have.  Instead, we just want to touch on a couple things that we don't necessarily agree with the manufacturers on; more specifically operating conditions and weight.  In regards to the operating temperature, we can say with confidence that both IP cameras can handle the cold.  We actually found that the Dahua 5300C performed in temperatures as low as negative thirty without any complications; we did not test the Hikvision 2632 for this.  Our disagreement with Hikvision and Dahua comes in at the other end of the spectrum.  While we're not able to reproduce a one hundred and forty degree climate, we have some doubts about either cameras ability to withstand that high of a temperature.  In the past, these cameras were only rated to one hundred and twenty degrees.  Without making any modifications to either cameras, both manufacturers simply turned around one day and started telling people that it was now one hundred and forty.  We don't have the evidence to be able to accuse them of being wrong, but we remain skeptical and would advise that you don't plan on them making it in those conditions.

The issue of weight is really just humorous and maybe a little confusing.  A weigh in of the Dahua 5300C puts it at exactly 2.8 pounds which is exactly what Dahua claims.  According to Hikvision, the 2632 weighs approximately 2.6 pounds, putting it just slightly under the weight of the 5300C.  If you recall what we said earlier, "-the 5300C feels like a freight train in your hand...", it comes off as quite a surprise that these cameras are supposedly so close in weight.  A weigh in of the Hikvision camera proves this to be incorrect.  Even if you add the junction box to the overall weight of the 2632, the whole thing only weight around 1.5 pounds; that's more than a full pound less that what the spec sheet claims.  We're not sure where Hikvision got their number from, but don't take the claimed weight of this camera to heart.

In our previous review of the Hikvision DS-2CD2032-I and the Dahua IPC-HFW4300S, we first took a look at some indoor shots at about 20 feet using the digital zoom feature.  The purpose was to show what kind of finer detail you could expect from both IP cameras.  Since it's completely unrealistic to place the Hikvision 2632 or the Dahua 5300C in an environment such as that, we going to start with some warehouse shots instead.

Before we say anything else, please forgive our mess.  If you read our previous review, you may recall that our cardboard cutout in the far corner is approximately 50 feet from the cameras mounting surface; the cameras are mounted at 15 feet.  We liked what we saw here from both cameras but the Dahua 5300C really outperformed our expectations.  Even with it zoomed out at its 2.8mm mark, we can still make out Ron's face and the sign around his neck at 50 feet.  It's a bit fuzzy around the edges, but be sure to click on the image to view it in full size.  You'll notice that you have no hope of making anything out in detail with the Hikvision 2632, but if you look hard enough, you have just about enough for a positive ID with the Dahua 5300C.

If you haven't noticed yet, the Hikvision 2632 has a noticeably wider angle of view.  It becomes much more obvious with the above image.  What we're looking at now is both cameras zoomed in all the way to 12mm.  There is only a 0.1mm difference overall between these two cameras and that's at the other end of the spectrum; the 2632 has a 2.7-12mm lens while the 5300C has a 2.8-12mm lens.  With that small of a difference, the only explanation is that the Hikvision utilizes a larger image sensor.  The end result is that the Hikvision 2632 has a larger field of view, but it also means the Dahua 5300C gives us a clearer image.  Again, be sure to click the image to view it at full size.

After we turned the lights off, our results did a little bit of a flip.  Even though you may see a couple cracks of light coming in, this is absolutely still a pitch black environment (0.000 lux).  The Hikvision camera performed beautifully here, giving us everything that we could possibly expect of it.  We were a little disappointed when we looked at the Dahua 5300C.  While we still get a decent picture from it, it almost looks to be out of focus.  No matter how much we played with the 5300C, we just couldn't get it any better than this.  The only good news for the 5300C is that a completely pitch black environment is never going to happen unless you have them installed indoors with no artificial lighting and absolutely zero ambient light as we do here.

You are definitely going to want to click and blow up the image for this one.  Our lettering around Ron's neck is going to be what we look at first.  You can clearly make out the numbers and letters with both cameras although the Hikvision 2632 is crystal clear and we still get that odd out of focus look with the Dahua 5300C.  Passed that, we almost completely lost Ron's when looking through the 2632.  We initially thought this had something to do with getting bounce back from the Infrared (IR) LEDs, but even after moving things around, it didn't help.  We got a little more of Ron's face with the Dahua 5300C but maybe not enough for a positive ID.