How to view a Security Camera System on Two Monitors

Most of our security camera video recorders feature dual video outputs that include a VGA and HDMI connector. These two video outputs display the same exact screen, meaning what you see on your VGA monitor will be the same as the HDMI monitor. They will not allow you to have your cameras split between two screens. For customers looking to have their security camera system displayed in a split screen view between two monitors, we suggest the purchase of our recorders with Dual HDMI outputs. 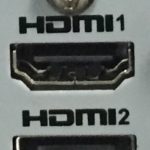 Some of our DVR and NVR recorders feature two HDMI ports in addition to a VGA port. The picture to the right shows what the HDMI ports look like on the back of the recorder if it has two HDMI ports. The port labeled HDMI1 output the main screen with menu accessibility, while the second port label HDMI2 outputs a camera grid in live view mode. As shown in the video below, the HDMI displays can be set to display certain cameras in sequential order so that they are split between two monitors. It is important to note that such a split display is only possible for live view mode; video playback of recorded video would be done thru HDMI1.

The following model recorders have Dual HDMI outputs as shown in the video above so that you can display cameras from your surveillance system on two monitors: