How To Connect Security Cameras to a Power Box

CCTV Security cameras require power to operate. Security cameras use RG59U coax siamese wire or CAT5e networking cable to transmit video. Whether you are installing a power box for a new or existing camera system, it is important to understand how to connect cameras to a CCTV Power Supply Box. DC current is polarized meaning it has two leads, a red one for positive, and a black one for negative. We recommend using a power box in a camera system because it allows for stable power distribution. A power box enables a cleaner installation versus using individual 12V power supplies for each camera.

What is needed to connect a security camera to a power box?

How to connect a security camera to a power box?

The video below shows how to connect a security camera to a power box using a siamese coax cable with two-lead power wire or a power pigtail. It is important to understand that DC power has a positive wire and negative wire. Positive wires are red, and negative wires are black. The leads need to match the corresponding color in the power box to avoid damaging the camera.

Siamese Coax Cable From A Roll

When using siamese coax cable from a roll there are 2 bare leads for power on one end for connecting to a power box. The other end of the cable requires a Male DC Power Terminal to plug into the pigtail on the camera. Ensure that both leads of the power wire connect to the correct screw-down terminal for positive and negative. If you mistakenly cross the polarity of the wires it will damage the camera.

A DC Male Power Pigtail allows plugging directly into a cameras pigtail, coax siamese tipped with a female terminal, or premade siamese cables. The same precaution must be applied when connecting the positive and negative leads on the DC power pigtail. Double check that your wiring match up on both sides to avoid damaging the cameras. Here is a picture of a power pigtail showing the black and red leads. 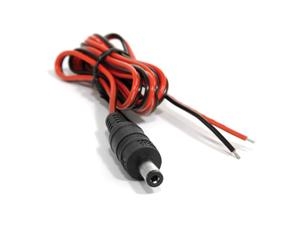