What can we say about the Dahua IPC-HFW2300R-Z (2300R-Z)?  For a more economically designed and produced camera, we we're actually very impressed for what we got for our money.  Being a Dahua manufactured product, we've come to expect a certain level of functionality and quality, and we certainly get both with this Dahua IP Camera.  It's a sleek, simple, and mid-sized design makes it perfect for nearly any location and a large amount of applications.  Whether you're a home owner, business owner, or professional in the industry, the Dahua 2300R-Z is worth taking a look at. 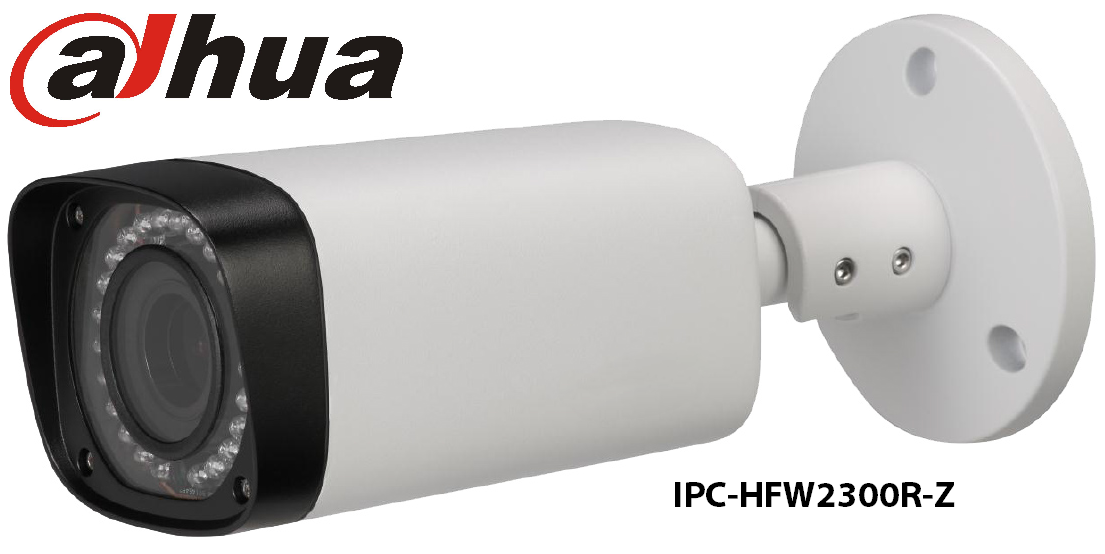 The Dahua 2300R-Z comes in the form of Dahua’s new style of bullet camera.  The previous models of IP bullet camera, such as the IPC-HFW5300C, have been considerably heavier in weight and larger in physical size.  We brought up weight and physical size in the past as it pertained to cheaper cameras and companies trying to cut cost but in this particular instance, we don’t believe this to be the case.  Considering the 5300C is one of the heaviest IP cameras we’ve laid our hands on, there was definitely some room for improvement in this department.  Enter the 2300R-Z that comes in about 3 inches shorter than the 5300C and less than half of the weight.  It also appears boxier than the 5300C but it’s actually smaller in diameter.

Also unlike previous models, the Dahua 2300R-Z does not use the more standard “ball joint” in its 3 axis bracket.  Instead, it uses something we can only describe as teeth on a gear-like mechanism.  We’ve seen this type of bracket before and while it is arguably more difficult to make adjustments to the bracket, it’s not susceptible to small slippages over time that you get with a bracket being held in place solely by friction (such as a ball joint). 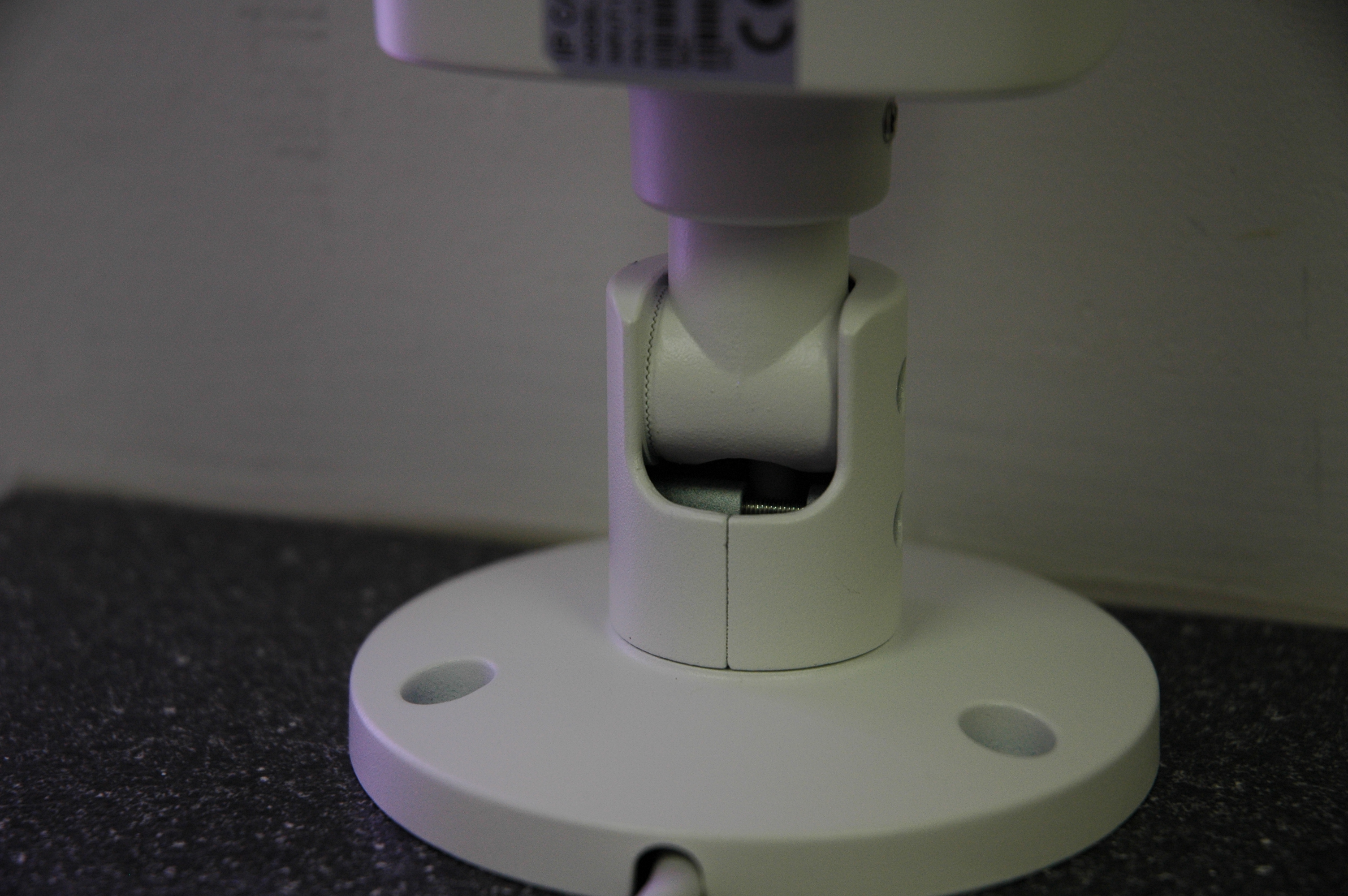 The length of the body measures 133mm.  With the bracket attached and fully extended, the entire camera extended measure 213mm.  For what this camera offers in features and when compared to other similar models, this bullet camera is relatively small in size for packing such a big punch.  It’s just shy of 80mm in diameter which makes it smaller, if only slightly, than most of its competition.  It’s relatively small diameter also makes it very close competition for models featuring only a fixed lens that generally have much smaller body styles.  Other measurements you may find useful are the diameter of the base (90mm) and the length of the pigtail (approx. 290mm).

As we've done before, we'll list some of the most notable specs for the Dahua 2300R-Z.  Following the spec sheet will be a brief write up covering certain aspects of some of the 2300R-Z specifications. 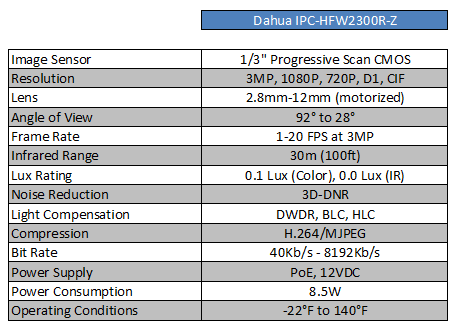 Lens – This camera uses the very common 2.8mm to 12mm adjustable lens.  Note that it is also a motorized lens and no manual adjusts will be needed to make changes to the zoom and focus.  The focus will auto adjust after you’ve selected the zoom.

Angle of View – The 2.8mm to 12mm lens creates angles of view as wide as 92 degrees at the 2.8mm mark, and as narrow as 28 degrees and the 12mm mark.  This camera provides a range of viewing angles that is noticeably larger than other cameras equipped with a 2.8-12mm lens.

Frame Rate – Like most of Dahua’s 3 megapixel IP cameras, the maximum frame rate at this resolution is 20fps.  Please note that “real-time” (30fps) recording is possible at all other available resolutions on the camera.

Infrared Range – Similar to other cameras in its class, the Dahua 2300R-Z has an Infrared range of approximately 30 meters (100 feet).  The cameras built in IR board uses 24 IR LEDs to evenly disburse IR light to illuminate the designated area for the IP camera.

Power Supply – This is a PoE capable camera meaning you can use your PoE switches to power them like any other PoE IP camera.  For those of you wishing to still use dedicated/individual power supplies, you’ll need to utilize a 12V power supply with this camera.

Power Consumption – We only point this out to add that 8.5 watts is the maximum amount of power this camera consumes.  This amount of consumption will only occur when the Infrared board is on.

We were very happy with the image quality from the Dahua 2300R-Z when placed in a well lit indoor environment.  For the sake of being able to demonstrate motorized zoom, we couldn't take full advantage of the large vertical field of view, but you can very easily see how large of an area a camera like this can potentially cover.  As it has been in the past, our cutout is positioned approximately 50 feet from the cameras mounting surface and the camera is mounted at 15 feet.

As happy as we were with the above image quality, we were met with an equal amount of disappointment when we shut the lights off.  Dahua IP cameras always tend to "lose a little bit" when put into pitch black environments but this was different.

We see things jump a little out of focus, or appear "fuzzy", as we have in previous image samples.  Our problem with this camera in complete darkness is not limited to one thing.  As you'll see in the image to the right, the Infrared appears almost absent.  We noticed when zooming in with the motorized lens, the Dahua 2300R-Z image started to become darker and darker.  At it's most zoomed in point (12mm), you can barely make out the floor.  Objects also started to blend in with the wall.  For instance, when we had a real live human being back there waving at the camera, his hands disappeared into the wall.

We know what some of you may be thinking.  The image on the left shows that the issues we're having might be related to Infrared glare.  We considered that as a possibility so ran a simple test by moving our cutout around the area.

The above image shows the cutout positioned at 30 feet from the cameras mounting surface.  The Infrared light in clearly being distributed evenly.  If we were getting Infrared glare, when positioned to the extreme right, the cutout should barely be visible.  In this case, we actually see that moving the cutout around 20 feet closer to the camera actually makes a substantial difference.  Not only can you actually make the figure out now, but you can also begin to identify smaller details.

We mentioned we had more than one problem here.  Getting the finer details out of the image is the problem that we're going to tell you will prevent you from using this camera at all in a dark indoor environment.  The Auto Focus feature of the camera is the culprit this time.  It does a completely inadequate job of focusing properly when in a pitch black environment such as this.  Not only does it take significantly longer to focus in this setting, but it also over corrects in the last few seconds every single time.  The video below will demonstrate this.

The good news is that when the Dahua 2300R-Z is given any ambient or artificial lighting whatsoever, it performs spectacularly.