As more states are creating legislation for legalizing medical and recreational marijuana, security is becoming an increasing concern. Most states have strict requirements and guidelines for marijuana businesses ranging from cultivation, transportation, and distribution. Many requirements include video surveillance to capture criminal activities. CCTV Camera World is no novice when it comes to marijuana surveillance. Businesses we’ve helped include many marijuana cultivators in states like Oregon, Washington, California, and Michigan to name a few. We’ve helped dispensaries in nearly every state that has legalized medical marijuana. We hope this guide will help you make some determinations on what you need to meet regulations in your State. 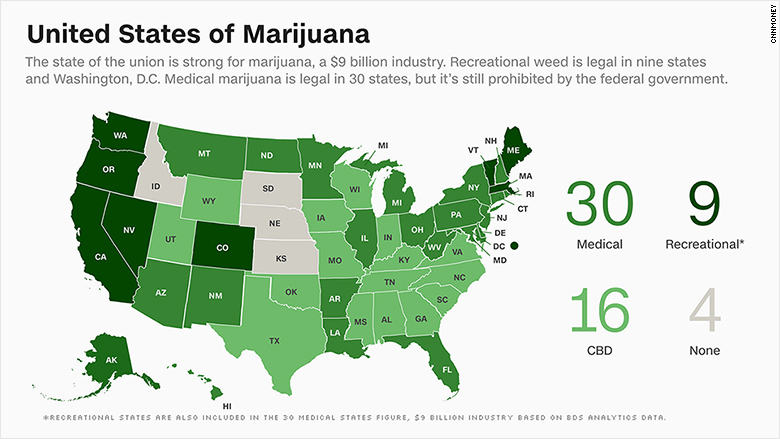 What type of system is right for marijuana industry security?

This is probably the most important question when considering a system for marijuana businesses. It depends on what type of business it is, and the size of the location. If it is a smaller location, like a dispensary, then an IP camera system might be just fine. If the location is larger, like a grow operation, then a DVR camera system is recommended. These recommendations are based on cable runs, and overall maintenance of each system.

IP cameras have a limit of 300ft for a single cable run from a recorder, or network equipment. These runs can be extended by using PoE extenders or PoE switches. However, using extensions adds more devices that need to be maintained, and more potential points of failure. More importantly extenders and switches are not weather proof so using them outdoors is not easily done. Any networking equipment will require additional enclosures for outdoor use. More equipment and devices increase upkeep and maintenance costs associated with a security system.

Like mentioned before, for smaller grow operations or dispensaries where long runs are not necessary, then an IP camera system may be the right choice. IP cameras offer more features and oftentimes have better visual clarity than their coaxial counterparts. Advanced detection features like digital tripwire, and intrusion detection offered on our Smart Security Cameras are great for monitoring access to important areas or cash registers.

HD over Coaxial Systems for Marijuana Grow Operations and Greenhouses

HD over Coaxial cameras rely on Siamese cable that has a large copper video cable and a splittable 2-lead power wire attached to it. These cables allow you to run video up to 1000ft or longer depending on the resolution of the video signal. This added distance can prove to be very useful in larger buildings where marijuana grow operations might be located. The only additional equipment other than a DVR is a power box that provides power to the cameras using the power wires of the Siamese cable.

With coaxial systems there is usually less maintenance and upkeep required. If a camera goes out it’s much simpler to replace a camera without having to re-configure network settings. In addition, HD security cameras over coax are less expensive when per camera cost is considered. Power boxes generate less heat, which causes less wear and tear over time when compared to power over ethernet equipment. Additionally, with no power conversion done at the camera there are less points of failure inside the camera.

Another added benefit of coaxial cameras other than reduced upkeep and maintenance costs are the reduced upfront costs. Coaxial cameras and their recorders are anywhere from 5-25% cheaper than comparable network based systems. Plus, less power hardware is needed for long cable runs in HD over Coax surveillance systems. With the lower amount of equipment needed installers won’t need to order and account for as many things.

Which cameras are required for marijuana cultivation and dispensaries?

The biggest variable in a security camera system is the amount of video clarity you need. For the marijuana industry this could be based on your state’s requirements or if security is an actual concern. Believe it or not most states do not require super high resolution cameras. This can be due to the amount of storage that’s needed to record the large amount of data that’s produced by high resolution video. For example the state of California requires a minimum of 720P cameras which is below 1080P Full HD. Most states require at least 15 frames per second video capture and continuous 24/7 recording.

Depending on whether you want to meet the bare minimum or ensure quality capture you will want to make a site layout for what cameras you do or don’t need. Some states require a site layout before they license a location to grow, store, or sell marijuana. To use California’s requirements(pg. 32) as an example they outline the following:

The last guideline is where state requirements do not meet actual performance from security cameras.  For example 720P resolution, which is California’s minimum, does not allow for good facial capture at distances beyond 10-15 feet in most conditions. Also 720P cameras are not as common as they once were; 1080P has become the bare minimum from most CCTV companies.

For good facial capture we recommend using 4MP (2K) resolution or higher. High resolutions allow for cameras to be mounted further away but provide enough clarity to see facial detail. However it is important to note that higher resolutions require more storage space, so those cameras should be reserved for retail areas, or entrances and exits. For areas where you need general surveillance or simply need cameras to meet state requirements then you can settle for a 1080P camera. All cameras can be set to lower resolutions and/or frame rates to reduce the storage overhead.

Another common question we receive is how efficient 180 degree or 360 degree cameras are. These cameras can be useful in some situations where you can capture multiple areas without using multiple cameras. It is important to understand their limitations though. Panoramic cameras do not offer much clarity at a distance. We only recommend using an ultra-wide angle camera if the ceiling height is less than 10 feet and you do not mind only being able to recognize objects within 30 feet of the camera.

* We are not lawyers and this information may or not be up to date - this table does not serve to provide any legal advice. Confirm with your State or municipal licensure before making any decisions on a security camera system - Some municipalities have more strict requirements than state level
** All states require 24/7 continuous recording
*** Vermont based loosely on requirements for medical dispensaries. If you are in Vermont we recommend contacting your municipality for more clarification on recreational requirements

Installation tips and camera placement for the marijuana industry

In order to make a site layout you’re going to want to understand which cameras should go where. Some states require a site layout before a license will be approved for a marijuana dispensary or grow operation. Large box cameras with enclosures is a thing of the past. The two popular and less conspicuous options of today are called bullet or dome cameras.

As a general rule we suggest installing dome cameras where there is a ceiling, soffit, or eaves to mount the camera to. For walls, or rafters and most outdoor applications we recommend using bullet cameras. Rafters allow for the use of zip ties to secure bullet cameras rather than drilling or screwing them in. In general there is usually not much difference between a dome camera and it’s comparable bullet camera. Sometimes a bullet camera might have longer IR night vision distance.

You can see from our table of state requirements a distance of 20 feet for facial capture is almost universal. However this requirement doesn’t take into account protecting the cameras from potential intruders, or employees who know where these cameras are. For the low 720P resolution that states require the camera would have to be within 10-15 feet to get facial detail. Using lower resolution cameras to try and capture faces can lead to the camera being installed where vandalism is far too easy. Make sure that those cameras offer some vandal resistance, or consider a camera with higher resolution so you can mount them further away.

The last consideration is IR night vision. You will want to check to see if there’s any strict requirement from the state or municipality on IR distance, most do not specify anything about night vision. When mounting surveillance cameras make sure there are no close walls or obstructions that can reflect IR light back into the camera's lens. You can read more about IR issues and installation tips to avoid them by reading our Common Issues with Security Camera Infrared guide.

With all states requiring some form of continuous 24/7 recording it can be a challenge to have the right amount of storage. This is further complicated by the fact that many states do not offer requirements for a frame per second recording rate. The amount of storage required for a system is dependent on the number of cameras, the resolution of those cameras, and the frame rate that the cameras record at.

Due to states having varying requirements for storage and resolution it’s impossible to make blanket recommendations. The first step would be to figure out how many and which cameras you need for the system, which would be based on your layout. This will help you calculate the overall storage needs based on your state’s requirement. For a general estimate we have a Security NVR and DVR Hard Drive Calculator that allows you to specify how many cameras, their resolution, and the frame rate. If you need help determining how much storage you need, and are interested in purchasing a system from our company, please feel free to reach out using the Email Us contact form located at the bottom of our website.

For recording strategies, however, we can make some recommendations. A common and underused recording strategy is to record the substream of a camera 24/7 and record the main stream using motion detection or Smart Detection triggers. The main stream of a camera is it’s primary stream that offers the full resolution from the camera’s video sensor. The substream is a secondary stream that can be recorded at a lower resolution. Both streams are adjustable depending on what a camera allows for each stream. Since most states only require 720P you can pragmatically use this recording strategy for increased security with higher resolution cameras. Keep in mind that some states restrict security cameras to record 24/7 for all streams.

Smart Detection and motion based recording are also a great way to set up alerts that some states require be sent from your security camera system. Our systems support email alerts and push notifications to smartphones. Now some states also require some form of “Camera Offline” alerts which are also supported by our systems.