There a lot of things that can go wrong with security cameras.  The most noticeable are going to be problems with the image itself.  The good news is that identifying the problem isn't as difficult as you may think.  For as many things that can potentially going wrong, each one of those problems presents themselves with their own set of unique characteristics.

A common thought among the public is that if a security camera is rated for outdoor use, this means that it’s impervious to almost anything.  This just isn’t the case; you’re just going to have to take our word for it.  The sun is more than capable of destroying your cameras if you’re not careful.  Direct sunlight entering your camera’s lens will eventually run into your image sensor just beyond that.  Over time this will start to create distortions on the glass but this is nothing compared to the effect it has on the image sensor.  Before very long, you’ll begin to see some pretty awful video degradation; this includes blurriness, changes in contrast, and eventually complete blackout.  Of course no one is intentionally pointing their camera into the sun but the sun moves and sometimes in a way that can hurt your camera.  Monitoring or reviewing video for the first several days after installation will show you if that camera will need to be adjusted or not.  Look for any obvious bright glares.  These don’t always need to come right from the sun.  Highly reflective surfaces are just as detrimental.  Wide Dynamic Range (WDR) is not a solution and will not save your camera. 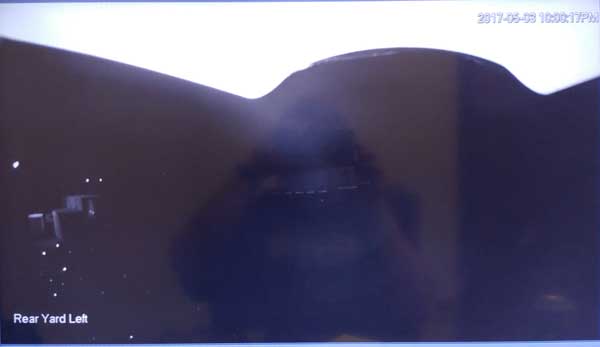 There’s a general rule among the professionals who actually know what they’re doing that says, “Don’t ever mount your cameras to a metal surface.”  We’re paraphrasing but you get the idea.  Surges are really the big reason for this but “bleeding” electrical currents is the other.  Bleeding is usually a result of something being wired improperly and that current is making contact with the conductive surface or being injected back over the wire in to the DVR.  That current will move around everywhere is can and eventually travel right into your camera if it’s not insulated.  If you find yourself unable to mount your camera to anything other than a metal/conductive surface, you’ll need to find a solution to the problem to avoid ever having one.  Mounting a block of wood to this surface and then your camera to the block is very simple fix for this.  Just ensure that no metal on metal contact is being made from the camera to any part of the structure. A similar image would be seen when current is injected back over the wire in to the DVR. This is frequently seen when staples or other cable anchors are used to secure the wire. When power bleeds in to the coax portion of the video wire, it will eventually also damage the motherboard inside the DVR and cause irreparable damage that no product warranty will cover. The lines can be horizontal or vertical, and are always colored.

Ground loops are complicated are really boring to explain, so we’re not going to.  Ground loops occur for a few different reasons but this issue will always present itself in the form of horizontal lines running across your screen (hum bars).  Faulty power supplies and/or faulty cable are frequent culprits but improper wiring in the home/building is much more common.  If you discover that your image problems are related to the power supply or cable, you simply need to swap them out.  However, if bad wiring in the structure is found to be the problem, locating it and then having someone fix it is not exactly a quick or cheap fix.  This is where ground loop isolators come in.  They’re simple plug-and-play adapters that attach to the back of your camera and then filter this electrical noise out of your video feed.

NTSC and PAL are two completely different types of video encoding systems.  There’s not a lot to say here.  Depending on the country you’re in, you’re going to be using one or the other; the U.S. exclusively uses NTSC.  If you find yourself with a product using the contradicting system, it will be blatantly obvious the second you power the camera on.  You will notice that you may be able to make out some portions of the image, but most of the screen will covered with black lines that appear to be shaking in place.  Your only solution to this is simply to read carefully before purchasing anything.  This is one of the risks of purchasing from outside of your own country.

If your camera lacks an IR cut filter, you’re not going to be able to use it outdoors.  This usually isn't a problem or an issue for any professional level security cameras but it’s still something to confirm.  Your “starter” cameras that cost around $30 or less are where you’ll need to be careful.  Your issue here will be that your image will appear very bright as if the brightness settings are just way too high; needless to say, adjusting the brightness settings are not going to help if you're completely lacking this piece to the puzzle.  While you’ll certainly not be able to use them outdoors, also be aware that certain ambient lighting in an indoor environment can also cause a similar effect.  In addition to having a major problem with daylight, they also will have a difficult time interpreting Infrared properly in darkness.

There are several things that can go wrong with a power supply but related problems will always appear in your video as “rolling lines.”  These are horizontal lines across your screen that will normally move from bottom to top; lines moving in the opposite are not unheard of so don’t rule it out.  The image from your camera will remain behind these lines and will not move with them.  This can often be confused with the lines you can get from a ground loop problem, but the lines caused by a group loop will remain in a single static position.