Over Decode Ability Explained for NVRs

If you've ever gotten the message "Over Decode Ability" on your NVR's monitor and wondered why it's there, then you're not alone. The majority of folks that see this have a system comprised of 4MP security cameras or 4k security cameras. Let's go ahead and define it:

Over Decode Ability - The maximum processor time is being used to convert video to a usable form and deliver it to your monitor. No additional streams can be displayed.

What does that mean?

NVRs are meant to be a way to centralize your IP security cameras to one web server/NAS. They are built with limited specs to keep costs down while still running efficiently. They are not built to be a video processing super computer.

Essentially there are different tiers of NVR that we carry. There are the Economical NVRs, Enterprise level NVRs, Economical 4K NVRs, Lite-Duty 4K NVRs, and Enterprise level 4K NVRs. Some have more processing power than others. Given that they are not manufactured with a dedicated graphics card, the processor must handle all computing. The best way to view your 4MP or higher cameras is through a gaming desktop computer built to handle multiple 4MP/4K video streams simultaneously. Check out the table below for the recommended computer hardware: 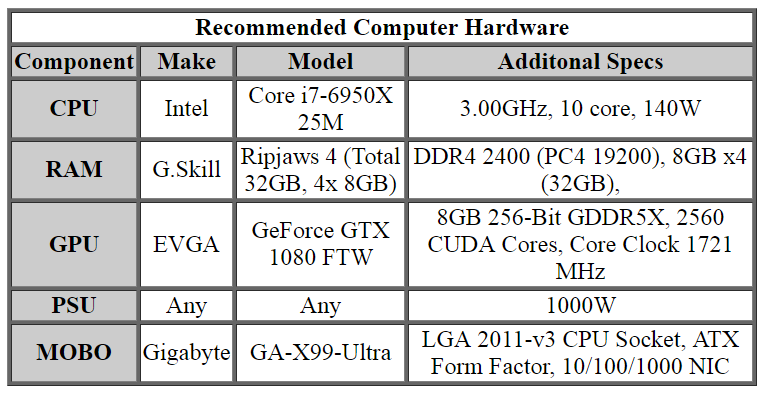 *Please note these specs are current at the time of posting. Newer hardware will be preferred if this equipment is now out of date. Feel free to contact us for recommendations.

There are two scenarios where you can run into this exception. A user with a large number of high clarity 4MP cameras that record to the NVR attempts to playback footage from the night before across 9 channels at once. Maybe the first 3 play the recorded footage, but the other 6 give an exception of Over Decode Ability. 4MP cameras have a pixel density twice that of a 1080P camera and twice the information to process decode video for the same 1 second of playback. Given the save the Queen mentality of the NVR, it first allocates processor time to recording live footage. The rest of the available processor time is used for playback, live view, remote monitoring, and other functions. The recording processor time is reserved, and the NVR displays channels starting at the first selected until the cap is reached. When the cap is reached the NVR will stop displaying video on the remaining channels and display this exception instead. 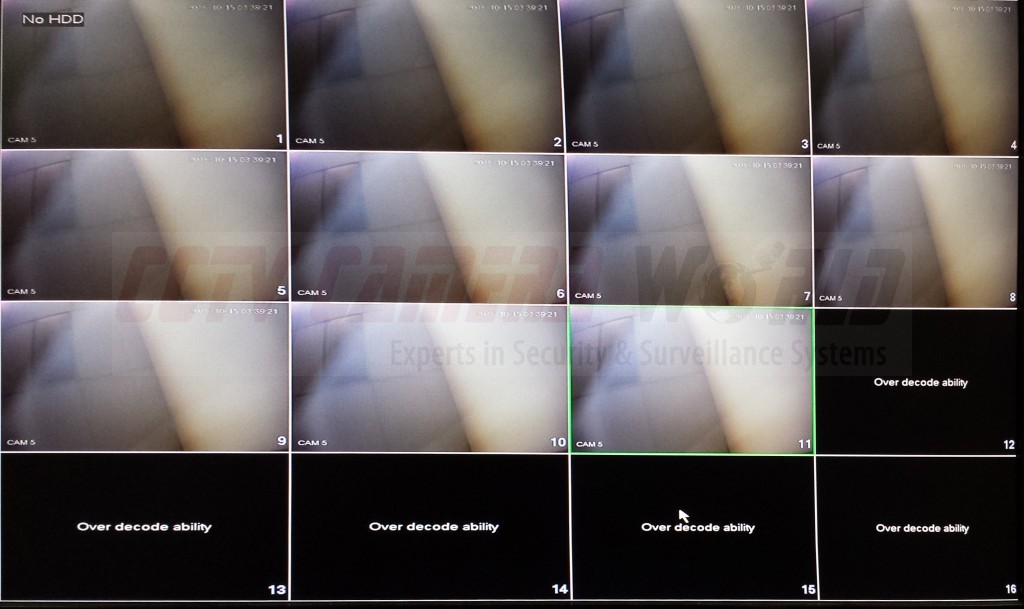 This exception can be thrown during playback of lower clarity cameras being played back as well, or just 1 4MP camera, provided that the playback is set to fast forward. At 2x fast forward, 2 seconds of video will need to be processed every 1 second. At 4x, 4 seconds will have to be processed in 1 second. If your NVR cannot display a full 4 camera grid of 4MP cameras, processing 1sec per 1sec, it will not be able to process a 4MP camera 4 seconds to every 1 second.

The second scenario is receiving the exception on live view. Most commonly this occurs with very high pixel density cameras, such as 4K or 4MP. The user purchases 16 4K security cameras and a 16 channel 4K NVR with an integrated PoE switch. After bench testing all of the cameras and finding that they are functional, the user runs the cable, tests them for continuity, then mounts the cameras in their final locations. Upon returning to the NVR the user notices that most of the cameras are displaying Over Decode Ability in certain views.

Some NVRs will outperform others when it comes to displaying (x) channels of high clarity cameras. Keep in mind, these devices are built as NAS units with a web server. The primary function is to bring in camera feeds and store them to a drive. Its secondary function is to display live or recorded footage. As stated earlier there are quotas built into the software, and most of the processor time is reserved for recording.

However, it's important to note that video lag with IP cameras is normal and to be expected as a system records the video and displays it at the same time. Watch the following video to learn more about the limitations that NVRs have for playback, and some work arounds for viewing channels in Mainstream.

The best overall resolution is to use a very powerful computer to view your live footage and playback. We recommend a GeForce GTX 1080 FTW or better. Take a look at the recommended computer hardware table above as a graphics card alone will not be enough. You can use the SmartPSS software to stream video from the NVR to the Desktop computer. This software is available for PC and Mac. For video instructions follow the link; SmartPSS Monitoring Sofware Guide. Use the submit a support question button at the bottom of the page for a link to the download. Make sure to include your order number.

However, if you'd like to reduce the clarity of your cameras to 1080P most of your woes will go away. To lower the resolution of the cameras, navigate to SETTING > CAMERA > ENCODE. With most high clarity cameras if you downgrade the resolution the image sensor converts, you will get the improvement of a higher frame rate along with the potential for added storage time depending on your encoding settings. You can see the walkthrough on how to change your IP camera resolution in the video below.

If you aren't keen on lowering the resolution of your cameras you can view them live or playback old footage using your computer and our CMS software or the web browser interface.

Instructions on configuring the web browser for use with our products linked below: