How to power a PoE security camera using a PoE switch

PoE switches enable customers to fully customize their PoE security camera systems. Power over Ethernet or PoE technology is extremely useful for security cameras. PoE switches are commonly used for installations at larger facilities like warehouses or factories, or when installing a system between two buildings. PoE switches can be "daisy chained" to act as camera hubs, or extend cable runs. We recommend exercising caution before using any PoE switch to ensure that it is not capable of outputting Passive PoE power. While powering a camera using a PoE switch, the optional 12V DC connector is unneeded. 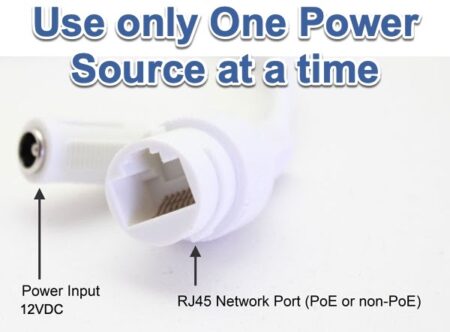 PoE, or Power over Ethernet, is a technology designed to simplify cabling by simultaneously sending power and data over one Ethernet cable. PoE is useful in systems like 4K security camera systems because Ethernet cable is cheaper, and easier to run than Coaxial cabling. Since power is sent over the same cable, there is no need for a separate power wire. In addition to the ease of using one cable, PoE and IP technologies support high resolution cameras that offer improved video quality for security camera systems compared to even HD security cameras over coax.

Unmanaged or managed PoE switch, what should I use?

If you are not an IT professional and do not have one available, or do not have a complex network setup, then you will want to purchase and use unmanaged switches.

What is a PoE switch?

PoE switches are multi-port power devices that can be used to power any number of PoE security cameras up to the number of PoE ports on the switch. For example, a 4-port PoE switch will have 4 powered Ethernet ports, and 1 or 2 up-link ports that do not provide power. The non-PoE up-link ports are used for daisy-chaining additional switches, or networking the PoE switch to a router, or NVR.

What are common uses for a PoE switch with PoE security cameras?

PoE switches can be used with IP cameras, IP phone, and other devices that accept PoE power. While there are many scenarios in which a PoE switch may be used, we encounter the following situations to be the most common the security camera industry:

Caution: Check your PoE switch before connecting anything

PoE switches provide varying types of power and have different specifications depending on the manufacturer and model of the switch. Understanding the power requirements of cameras, and knowing the specifications of your PoE switch will save you time and money. The convenience of using PoE is overshadowed if damage is caused to expensive security cameras by using incompatible power.

The main specification to watch out for is something called “passive” PoE. Passive PoE is power that is sent over an Ethernet cable regardless of the device’s power requirements. This type of power is also known as un-negotiated. In simpler terms, passive PoE sends too much electricity to PoE security cameras and has the potential to fry cameras instantly.

A compatible PoE switch will be labelled with, or have the specification of 802.3af or 802.3at PoE power. Ubiquiti branded PoE products are usually passive PoE power, and there are even reports of “compatible” switches sending passive PoE. For more information we recommend reading our Difference Between Active vs. Passive PoE article. Always check the spec sheet, or label on your PoE injector before connecting it.

Compatible PoE switches should be clearly labeled 802.3af or 802.3at.

If your PoE injector is unidentifiable or does not have a label stating 802.3af or 803.2at compliance, do not use it.

How do I use a PoE switch with PoE security cameras?

PoE switches feature a number of Ethernet ports that are powered, and up to two unpowered ports also known as “up-link” ports. For example a 4-port PoE switch will have 4 powered PoE Ethernet ports, and usually two up-link ports. PoE switches require power through a 110-220V power cord, or external power supply.

Here’s how to use a PoE switch with PoE security cameras:

The steps above are easy to follow as long you have a compatible PoE switch, and network cable that is properly crimped and tested to be the T-568B standard.

More PoE switch setups and configurations are discussed in our full guide on How to setup a security camera system on the network.