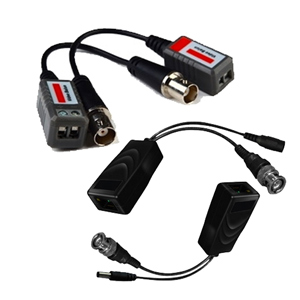 CCTV video baluns, also known as UTP baluns, allow the security camera installer to minimize cost of wiring for surveillance camera  installations by using network cabling such as category 6 or CAT5e cable instead of Siamese Coax Cable. With UTP video baluns any type of twisted pair wire or 2-wire structured cabling such as RJ11 phone wire can be used to transmit video signals up to 3000ft.

For example, if you are beginning a CCTV System installation in a an office building there may already be CAT3 or CAT-5 telephone lines. Presence of such cabling can eliminate the need to run coaxial cable. Also important to note is that you only need one twisted pair (two wire leads) to run one video signal. In a network CAT5 or CAT6 cable there are 4 pairs of 22 gauge twisted pair wiring, which means you can run up to four CCTV camera video signals per CAT5/CAT6 wire.

When choosing the correct Video Balun for your security camera installation, you should consider the distance of transmission. There are two types of baluns, i.e. passive balun (non powered), and active video balun (powered). For video transmission less than 1000ft, passive balun are be used on both ends. For longer distances, we recommend the use of Active Video Baluns to transmit video up to 3000ft. It is also common practice to use a passive video balun on the camera and Active Video Balun Receiver to achieve video transmission up to 1500ft.

Regardless of which UTP video balun you use, it is important to keep in mind that the quality of the wire determines the success of your CCTV install. CCA CAT5e wire can be used for short distances, but for long distances like 1000ft and above, we recommend using solid copper CAT5e wire.