When shopping for a security camera system, customer's usually focus on purchasing the best resolution cameras such as 4K security cameras to capture the greatest detail possible of intruders. While that logic may suffice in some instances, it doesn't help when they get robbed in the middle of the night by suspects wearing masks and the only way to identify the perpetrators is by the license plate on the vehicle that was parked right outside the main door. We hear about this too often that the surveillance camera looking right at the car didn't get the plate numbers, but instead captured a really bright and shiny license plate at night like that pictured below.

Based on 17 years of experience, this guide provides all that you need to know about how to choose the right license plate camera and how to set it up so you never miss any vehicle entering or exiting your property.

What is a License Plate Capture Camera?

License plate cameras are also commonly referred to as license plate capture cameras, license plate recognition cameras or LPR cameras. These are security cameras with specialized optics and shutter rates to allow the camera to clearly capture numbers and letters of license plates on stationary or moving vehicles. It is important to note that capturing does not mean converting the numbers in to a text file. It is simply the ability to visually see license plates clearly on recorded video.

Only license plate recognition cameras offer the ability to both visually capture the plates in discernible detail and also recognize the characters on the plate using OCR technology to store them in a database inside the camera. At the time of writing this guide we are not recommending LPR cameras as reliable LPR technology is too expensive for home or small business use.

Of course the first and most important step when considering license plate capture is choosing the right camera. There are tons of security cameras out there that will claim to have amazing detail and be able to capture anything and everything. As mentioned above, this is hardly true when it comes to license plate capture. The illustration below shows images taken from various 1080P security cameras that we tested ourselves by aiming the camera head-on at a car 15ft away.

Our testing showed that even HD security cameras 15ft away cannot capture a plate when a vehicle is moving. A high definition camera is made for general surveillance like capturing people or animals, not license plate on moving vehicles. This means the camera has a lower frame rate which leads to blurring when an object is moving faster than what the camera is tuned to see.

When blurring happens it becomes impossible to read text, and there is no way to enhance the picture. It is important to purchase a camera that allows for fine tuning of its shutter rate to allow plate capture from a moving vehicle. This can only be done by purchasing an actual license plate capture camera.

Let’s say the security camera you have does use a high frame rate and can capture plates during the day, this will not be true at night. A camera with an automatic or static shutter rate will not be able to properly compensate for plate capture at night while the camera's infrared LEDs are active. Night vision security cameras have too much IR light which creates a bright reflection, or glare on a license plate.

A license plate camera will allow the user to set dual shutter rate control, i.e. a separate shutter rate setting for daytime and nighttime to prevent IR glare at night.

A common misunderstanding about license plate capture is that a single camera can do it all. People who do not work with security camera systems every day may believe that any surveillance camera can be used to knock out multiple birds with one stone: capture license plates and facial detail, and view general detail around their driveway or parking lot all at the same time. While we wish this was true and it would save money, it’s simply not possible. 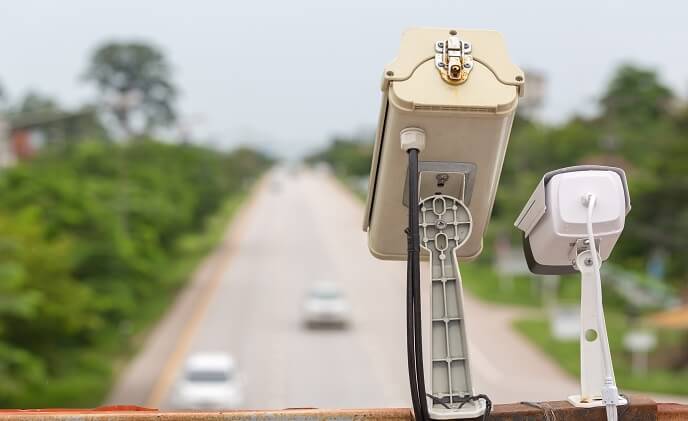 2. Mounting the camera in a good location

Location is also extremely important to keep in mind when expecting to do plate capture. The camera must be looking at approaching or exiting vehicles so the viewing angle between the camera lens and plates is no more than 15 degrees in the horizontal or vertical planes. If the camera is too far away to the side or mounted too high, the camera will not be able to provide a clear view of the plate. For best possible license plate capture, the camera will need to be looking directly head-on at the path of moving vehicles.

Height is another important factor as you want to make sure the camera is not mounted too high up. Mounting it too high and looking down at a plate would be similar to looking at the top of someone’s head and expecting to see their face. Large height differences create issues where the text becomes obscured and unreadable. It is easier to read a license plate when the camera is looking directly at it.

Once you have chosen the right license plate security camera for your application, and have mounted it correctly to ensure a proper view of passing vehicles, the last and most time consuming step is fine tuning of the camera's settings. License plate cameras don't have any magic algorithm to begin capturing perfectly clear video of passing license plates. The installer or user needs to spend time testing different settings to ensure proper capture in both day and night that will up hold in court. We recommend using your car with actual license plates to fine tune the camera according to its mounting location and ambient lighting.

The first settings that you would need to fine tune are the zoom level and focus of the camera. A license plate camera is meant to capture plate detail only, not the make and model of the vehicle or other general detail. If you are looking for general detail, a secondary camera is required. The license plate camera should be set to zoom in on the area of moving plates so that the plates are clearly visible when the video is paused and viewed in full screen mode. Plates appear more blurry at night, so make sure that the camera is zoomed in enough to provide a clear view of the plates at night. We recommend the plate takes up at least 1/3 of the field of view of the camera.

License plate cameras by CCTV Camera World allow the user to specify shutter rate and IR LED strength that best fits the amount of lighting available at the location where the camera is mounted. As shown in the video below, we set a shutter rate that allows for a suitable view during the day, and at night when the IR LEDs turn on. Having too low of a shutter rate, would cause glare from the IR LEDs. We recommend configuring these settings at night and making sure they work for a moving vehicle so the plate is not blurry. Once you have the desired settings set, leave the camera running till the next morning. When the sun is at its brightest, ensure the camera is displaying acceptable video during the day as well.

Configuration of the settings is best explained by example. In the video below we show how to configure our high speed license plate camera (sku IPD3MZ735) that can capture a license plate up to 150ft away on a vehicle moving up to 35mph. The steps below outline the functions performed in the video below on how to configure the camera's image settings for good day and night capture.

Security cameras capable of capturing license plates can be a challenge for any home or business that has concerns about prosecuting potential thieves or vandals. Technology is not quite there where we can have the Hollywood effect of capturing a plate super far away with amazing clarity. It takes a good amount of knowledge for setting up a surveillance camera to fully capture a license plate. Following the steps we discuss above should provide you an easy and affordable way to accomplish license plate capture on your property.