DVR vs NVR - Which is Best?

When shopping for security camera systems you will need to choose the type of system you want. Knowing the difference between a DVR and NVR is very important when purchasing a security system. Learn more about the differences, pros and cons, and features of both in this article.

You might already know that a DVR is a digital video recorder because of TV set top boxes from popular cable companies, but a security camera DVR is very different. The difference between a DVR and Network Video Recorder boils down to how they record video. DVRs take video directly from cameras over coaxial cable and then process it for recording. NVR systems are similar but they do not process video, NVRs simply catalog and store video that IP cameras stream to the NVR. In more technical terms, a DVR encodes and stores video signals, while an NVR stores video that a camera encodes.

What cameras do Network Video Recorders use?

NVR or Network Video Recorders record video data that is created or “encoded” by network security cameras, also known as IP cameras for short. There are two major types of IP cameras that are used with an NVR:

Power over Ethernet cameras offer the most convenience because they receive a power and data connection over a single cable. PoE eliminates the need for a power source nearby, and does not rely on intermittent wireless connections. Another big convenience is the plug and play feature that is prevalent in IP camera systems when purchasing compatible equipment. Plug and play compatibility makes installation and configuration a breeze. This is because plug and play systems will automatically configure IP cameras to connect and record to an NVR system.

Wireless IP Cameras offer some convenience but are not reliable for professional surveillance systems. Wireless cameras work by having a power source nearby and connect using WiFi radios to a wireless router or network. While the prospect of using wireless or WiFi security cameras sounds promising, it is riddled with limitations and need for maintenance.

Wireless are also great for scenarios where it is impossible or too costly to run a wire. For example, if there is a paved parking lot that requires security cameras, it may be the easiest to deploy wired IP cameras paired with WiFi Access Points to make them wireless. While costly, the results are impressive. We suggest reading our guide on how to make a wired camera connect wirelessly to learn more.

IP cameras are smart cameras that contain advanced hardware for capturing and encoding video. This means that IP cameras can also be used as standalone cameras, some support internal microSD cards for local recording. The advanced hardware also allows for newer features like video analytics, noise reduction, and other image processing tweaks.

What type of cable do I need for a Network Video Recorder?

Ethernet or network cabling is used to wire a PoE camera to the back of an NVR, or PoE switch. It provides video data, audio, and power over one cable. Ethernet cabling comes in different standards. We recommend using CAT5e or CAT6. Network cable is thinner, smaller, and easier to install than coaxial cable. It is used for cable runs up to 328ft. For longer runs you can use a PoE extender or switch.

When compared to coaxial cable, ethernet cabling is usually more affordable. Using pre-made cable is easier, but can cost more depending on what kind of runs you need. Purchasing a roll of cable, the required RJ45 connectors, and cable crimping tools saves the most money. However this cost saving is often offset by IP cameras being more expensive than their coaxial counterparts.

What cameras do Digital Video Recorders use?

Digital video recorders connect to and record HD security cameras and older CCTV cameras that are analog resolution. DVRs use a hardware chip to process and store video arriving from the cameras.

Setting up a coax camera system with BNC cameras and DVR requires a direct “home run” of cable from the camera to the DVR. In addition, power is not supplied over the video cable like IP cameras. Coaxial cameras require power to be run over siamese cable, or from a nearby power outlet.

Unfortunately these cameras usually do not support many of the advanced features you can expect from IP cameras. DVR technology is slowly advancing enough to support features like video analytics. If the analytics are a requirement for your project, then it may be worthwhile to go for an NVR camera system.

It’s also important to know that resolutions higher than 1080P are often recorded at lower frame rates (FPS) than a similar IP camera system. This is due to the amount of “bandwidth” or data that can be sent over coaxial cables. Coaxial cables were not originally designed to carry high resolutions. For example a 4K HD over coax camera can only record 7 to 15 fps at best.

Due to the reduced feature set and lower production costs, coaxial cameras are more affordable. If you are looking to put up a basic surveillance system then a HD DVR camera system may be the right choice for you.

What does a Tribrid DVR or XVR mean?

Tribrid DVRs or XVRs are digital video recorders that allow for the use of major HD over coax video types. It’s important to check the signal type of your cameras before replacing a DVR. These recorders also allow for IP cameras to be connected and recorded over a network or by using a PoE switch.

What type of cable do I need for a Digital Video Recorder?

Analog and HD over coax cameras use RG59U BNC tipped coaxial cable to send a video signal. It usually comes as a siamese cable, meaning it is paired with a power wire that runs parallel to the video cable. If you are running power through the siamese wire it will terminate into a power box near the DVR, or connect to an individual power adapter.

If you already have RG59 cabling in your facility, then a DVR system is the way to go. For new installations, we recommend using good quality solid copper RG59U coax from a roll. If you know that your cable is already good quality, there’s no sense in replacing it because HD security cameras can use the same cable.

Pre-made siamese cable is also readily available but is thinner than RG59U and limited for use with camera resolution up to 4MP resolution. Pre-made cable is good for people who have runs under 150ft and do not need 4K video.

Why would you want to go with a NVR vs. DVR?

NVRs and DVRs are both great options for a reliable security camera system. It used to be if you wanted higher resolution you would go for an NVR, however DVRs have caught up in resolution and provide a lower cost alternative. The biggest deciding factor will depend your cable preferences. If there is existing cabling that is already in place it and it is good quality RG59 coax, it will sway your decision towards a DVR if you want to keep the existing cameras and some HD IP cams later on. However, if replacing the cable is a task that you're comfortable with, then an NVR would be the way to go as network cable provides the simplicity of PoE. The below image summarizes the cabling differences between a DVR and NVR. 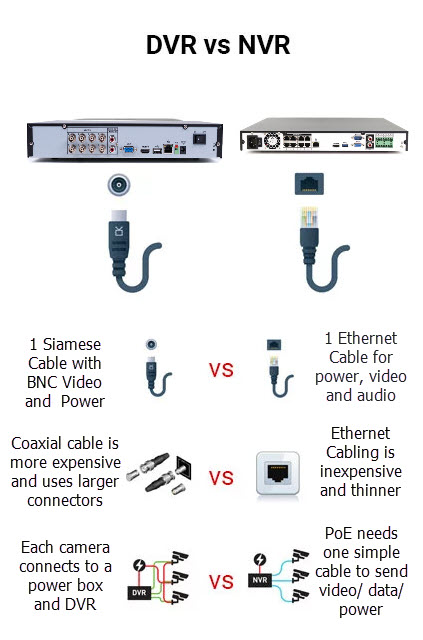 For a more complete of Pros and Cons between a DVR and NVR, the below table summarizes what we have discussed in this article. It should help you visualize the differences in making your purchase.